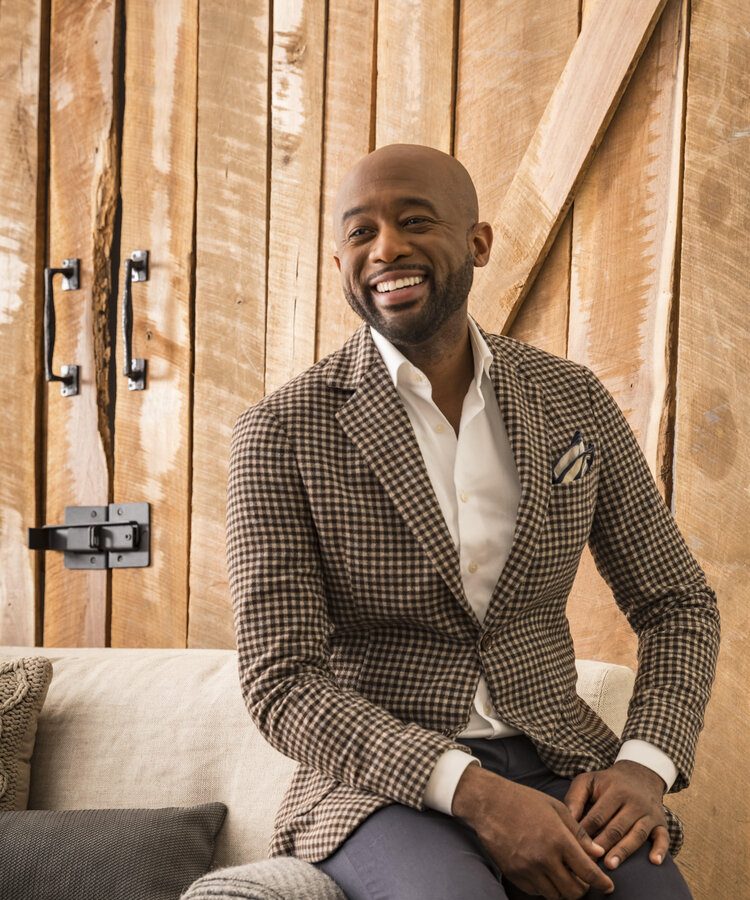 Our first Q&A of a new blog regular: The Make Life Beautiful Series!

Today, we're so excited to announce a new regular on the Studio Mcgee blog: our Make Life Beautiful Series!

We are firm believers that design education should be as accessible as possible, and we have found that learning about other's paths to success has helped us forge our own.

Throughout this new series, we'll be taking an inside look at some of our favorite aspirational designer's worlds and asking them a series of questions to talk openly about their journey into the interior industry.

If that isn't impressive enough, Mikel's story and voice are incredibly humbling and inspiring, and we feel honored that he took the time to share it with us.

I have honestly been working since I was a child. My mother and father warned me that if I took on a job at such a tender age of 10 years old, I would probably be working for the rest of my life. They were so correct in that.

My very first job was as a paperboy for the Southfield Eccentric newspaper in my hometown of Southfield, MI. There was a rep from the paper interviewing elementary school kids for jobs in the gymnasium, and the little small business person in me knew I was destined to be an entrepreneur.

I took on the job and would ride my bicycle up and down our cul-de-sac delivering the papers. When it got cold, my father would drive me down the street in our Taurus, so I could stay warm while working. I made about $75 per month, but that was a lot for a fifth-grader.

Tell us about your journey into the interior design industry, when did you realize that you could turn your love for design into a career?

My journey into design is quite the treasure hunt map. The lines will intersect all across the paper. After graduating from Morehouse College with a degree in marketing, I felt l stressed and lost. My mother suggested that I find my passion, and told me that I would know what it was because it would be something that I would be willing to do for free.

At the time, that made no sense to me. Honestly, my only goal was to pay my bills and make money. I ended up taking a job at Bloomingdales part-time because I liked clothing and decided to figure things out in the interim. I quickly learned that sales and I didn't work out. I hated that job.

One day on my lunch break, I went into Crate&Barrel and found myself totally lost in a trance. I looked up at my watch and noticed that I had spent 40 of my 45-minute break in the store. There was no time to head back to grab food from the food court, and at that moment, it hit me like a lightbulb. I started to have flashbacks like you will see in a movie.

I began to think about all of my furniture and accessories that I was constantly moving around and the stacks of design magazines surrounding my sofa. That's when I knew that design was what I needed to pursue. I ended up taking a job at Storehouse Furniture, and they quickly promoted me to the inventory warehouse, where I would oversee the shipments for several PR requests.

I remember being frustrated once again and wanting to be the person designing the rooms, not shipping the furniture. I ended up applying for a design assistant job on Craigslist, and the gentleman ended up hiring me. I worked with him and learned the business of design and how to actually operate a firm. After that, I decided to step out on my own.

I offered one free room design on Craigslist, as long as clients purchased the furniture. This allowed me to slowly build a portfolio for myself. At this point, things began to shift, and I knew I needed to make a change quickly. I decided to pack up everything and move to New York to chase my Carrie Bradshaw-Sex and The City dreams. But that was short-lived LOL...

Once I got to New York, I was so poor and needed to get a job. I ended up taking a part-time position at the Container Store, where I met my mentor, Jillian Browder. She introduced me to the world of high-end design and designer show houses. From there, I begin to slowly make my way into high-end design.

I had a few ups and downs, and also got a little cocky. I ended up quitting my job at the Container Store and started working on model home projects. Unfortunately, I ended up getting let go from that job because of a poor design. So, I found myself in a state of depression for a month and ended up going to get a job at CB2, which would later change my life.

I worked for CB2 in Soho and, after two years, ran into a set designer who came to the showroom. He worked for Dexter on Showtime. She had six assistants who were grabbing pillows, vases, and everything under the sun. I asked if there was any way that I could get a job working with him. He told me that he worked out of Los Angeles, but if I ever came to California, he would put me on a show. I asked my boss to transfer me to the Los Angeles showroom, and I moved there a month later.

Of course, the guy never picked up the phone once I got into town, but still wanted to make the situation work. I knew God brought me here, so I had no fear that things would turn around. I started asking everyone who came to that store that appeared to be a designer if I could apprentice or help them in any way.

Within the first week, I got a job on a Tien Volkswagen scene and HGTV working with Designer, Emily Henderson. I worked with Emily for about a month and then landed a job back in New York as a set designer on the show Jerseylicious for the Style Network.

Shortly after the show, I auditioned for HGTV Design Star and got cast on the show where I came fourth place. After the show, I got a call from Steve Harvey's producers, asking if I would come work in Chicago on his new daytime talk show. My first project was to design Steve Harvey's office. After having a very candid conversation with Steve Harvey, I told him I did not want to work with him, and my goal was to have my own television show. He looked at me and said, "You are crazy! I've never had anyone speak to me in this manner. But because you had the courage to do so, I'm going to put you on TV."

From there, I began doing television segments and hired a publicist to help me brand my business. The rest is all history that has kind of gotten me to where I'm at today.

If you could go back in time and give your young designer self one piece of advice, what would it be?

Study other designers' work before trying to create a space. You have a lot of talent but need to zero in on your design aesthetic. Once you find your design aesthetic, don't let anybody change that. Be true to who you are, and people will love your work. Much bigger things will happen in your life than you ever anticipated, and you are capable and worthy. Don't let the fact that you don't have a design degree ever deter you or make you feel differently. Last, enjoy the ride, because it is definitely a bumpy one, but you will have an interesting story that your peers will wish they had an opportunity to experience.

I find the majority of my inspiration from my travels. I love to scour vintage shops whenever I travel abroad. I'm really big into architecture and hospitality design. I try to use as much influence from a hotel lobby or restaurant that makes me feel a certain way. I naturally gravitate towards London and the historical styling of the city. That really speaks to me at my core.

My creative process typically starts with a few Instagram images. I will source several different rooms for inspiration. Then in true Designer form, I get sidetracked and begin interjecting my design aesthetic into the equation. At that point, I pretty much put the inspiration pictures off to the side and turn things into my version. I often have a difficult time using photos as inspiration. I try to let the home speak to me and move from there.

What was the most significant design or business challenge that you have encountered and grown from?

The biggest design challenge that I've had is learning how to have a well-structured business. You can love design all day, but if your business isn't set up properly, you will continuously lose money. I found myself, especially with higher-end projects falling in the middle of something and feeling like I was in a custody battle between clients and contractors who don't want to take responsibility for an issue.

Ultimately, I end up paying for things that I shouldn't have because I wanted to make the client and the contractor happy to get the work done.

What has been your biggest achievement? When was the last time you thought, "wow, I can't believe I just accomplished that!"

My greatest achievement would be when I was cast as a designer on TLC's Trading Spaces last year. This is one of the greatest moments in my design career. I have watched several of these designers for years, and to be in their presence and on the same playing field was completely different.

Growing up as a young adult, I watched Vern Yipp, Genevieve Gordorder, Ty Pennington, and several others, and to be asked to help host a show with them was the biggest compliment. I remember being so nervous at our promo shoot for the show because I was slightly starstruck. It still blows my mind that I was able to work on a show that I watched several years ago. That is an experience that I will never forget and will always cherish. To make things better, on my episode, I was paired up with Vern Yipp. This was a full-circle moment for me because he was my judge on HGTV Design Star. So, my episode was kind of like the student versus the teacher. It was such a great experience.

I am most excited about my new furniture line, the Mikel Welch collection, with YHD. I am introducing my new Primitive Modern Collection, and it will launch online through Houzz and Overstock.com next month. This has been two years in the making, and I am beyond excited to bring my Primitive Modern Design Style to the world. I am also excited about season two of Murder House Flip, my new TV show on Quibi. It has been one of the highest-rated programs on the Quibi network, and I can't wait to bring bigger and better makeovers next season!

To learn more about Mikel and his work, check out his website at mikelwelch.com, his Instagram page @mikelwelch, and tune in to his new series Quibi's Murder House Flip! 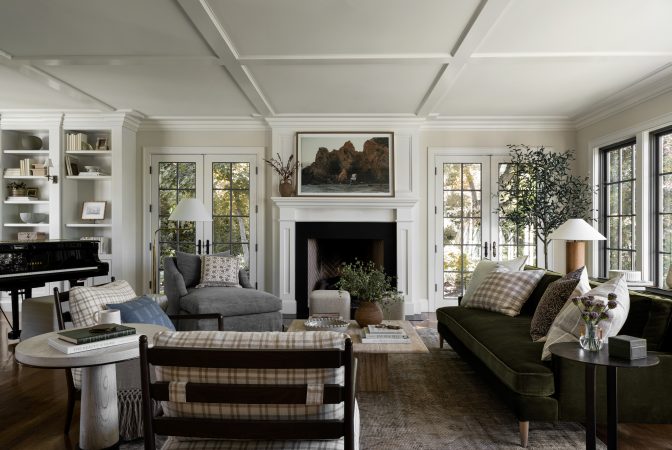 4 Ways to Elevate Your Home with Fall Trends 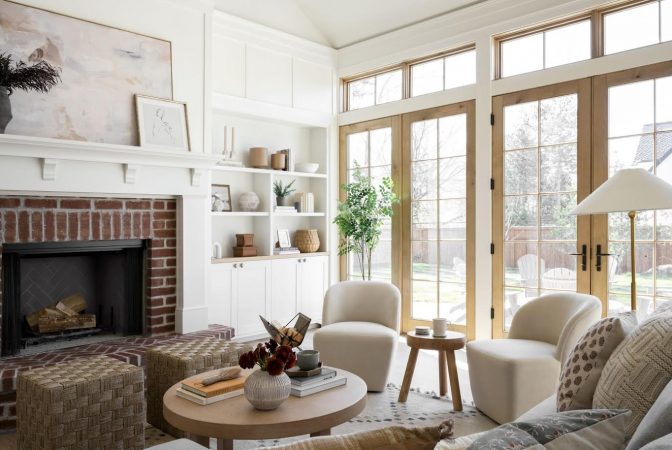 Transition Into Fall With This Living Room Look